According to Micah Voulgaris at the Cow Creek Groundwater Conservation District, we have received 1.77 inches of rain in 2022, less than the 2.02 inches received from January through April in 1954, the worst one-year drought on record.

While there is still potential for rain, the forecast does not look good. Texas rainfall is highly influenced by sea surface temperatures in the Pacific Ocean. Currently, the Pacific is exhibiting what is known as La Niña, a period of low surface temperatures that result in low evaporation. Low evaporation from the Pacific reduces rainfall over the continent of North America, causing drought. Currently, over 60% of the United States is experiencing drought conditions. 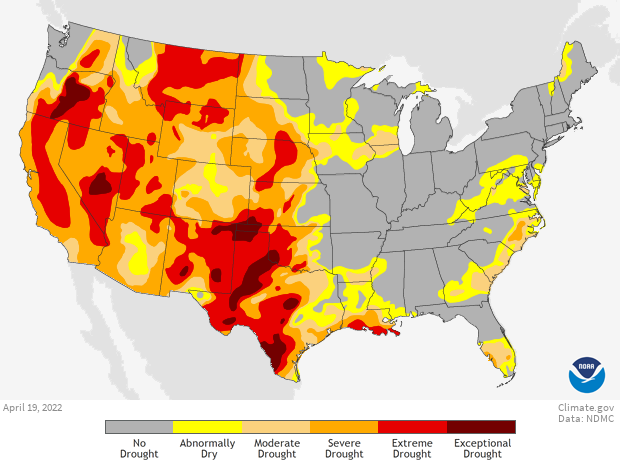 Unfortunately, a recent advisory released by the National Oceanic and Atmospheric Administration (NOAA) indicates that “La Niña is favored to continue through the Northern Hemisphere summer (59% chance during June-August 2022), with a 50-55% chance through the fall.”

In other words, we’re likely looking at a very dry year to come.

The Texas Hill Country is on the edge of a desert and it’s climate is often described as a “prolonged drought punctuated by extreme rain events,” a trend that is generally confirmed by rainfall patterns documented in Kendall County since 1893.

The drought that we are currently experiencing is already so severe that some Ashe juniper “Cedar” trees are drying out and starting to turn brown, indicating that deep soil moisture is depleted. This, along with the recent fires on Camp Bullis and in Medina County, suggest that we would be wise to prepare for possible wildfire.

The first step to reduce the risk of wildfire is to create a defensible space around your home by relocating landscaping away from the house and removing flammable debris and dead vegetation that is close to structures. There are also many retrofits to protect your home from wildfire. The Texas Forest Service has lots of great information about preparing for wildfires, however the best resources tend to come out of California, which has had to contend with many severe wildfires amid the worst drought in 1200 years.

Conserving water is also fundamentally important. We never know how long a drought is going to last or how intense it could become. The drought of the 50s, for example, lasted many years and nearly left Dallas without drinking water.

There are lots of ways to conserve water both in and around the house, including installing native landscaping, low-flow faucets and appliances, as well as rainwater harvesting.

Did you know that the City of Boerne has what may be the first ordinance in the country that allows homeowners to install potable rainwater harvest systems while also staying connected to the city water supply? Rainwater harvesting offers an opportunity to control your own water supply and maintain a reserve just in case other supplies fail, just be sure to purchase a water tank with ample storage, because a 50 gallon barrel isn’t a lot of water.

The best way to conserve water is to stop pouring our region’s precious water supply onto your lawn and landscape. Irrigation uses a massive amount of water and that water is only going to become more precious and expensive!

Our region’s native grasses, trees and shrubs have evolved in this climate and are better equipped to survive and recover from drought than most non-native plants and grasses. Installing native plants represents a simple shift that can make a huge impact on the sustainability of the region’s water supply. Native plants also benefit local wildlife, so do the right thing and update your landscape with Hill Country plants, then enjoy the birds and butterflies that visit!

Unless you have a rainwater harvest system providing all of your water needs, you are tied to your friends and neighbors through either groundwater or surface water from Canyon Lake. Therefore, we need as many people to adopt an ethic of water conservation and to promote this ethic to others throughout our region. (So please share this article!)

We are all in this drought together.